Mandalore consists of the former mercenaries faction Mandalore and the production factions MandalMining, MandalMotors and MandalTech.

The Mandalore, one of the first human colony ships, was on its way to a recently charted system on the Rim when an on-board ship malfunction caused the ship to make the jump to hyperspace in the completely opposite direction of the path intended. The resulting crash-landing left thousands of passengers stranded alone in an uncharted system that contained only one inhabitable planet. With no way to communicate their location back to those who might come to their aid, the colonists had to fight to survive. Over the many thousands of years of struggling to survive these strong people evolved into the culture now known as ‘Mandalorians’, or Mando’ade in their native tongue of Mando’a.

Initially humans, the Mandalorians continued to develop in their isolation, eventually encountering an alien race that had never been encountered. This race, which re-taught them the wonders of technology that had long been forgotten is now, sadly, extinct victims to one of the many great conflicts that have challenged the Mando’ade in their blood-soak history. Over several thousand years the Mandalorians developed their own research facilities, the most productive outcome being their famous armor. Only the learned suspected their human past. Other races in the universe guessed the Mando natives were yet just another example of parallel evolution.

The Aldacore Spire Base is located in the northern hemisphere of Manda’yaim. It is one of two major structural works seen from outer space, the other being the Klath’mor Monolith inside the Hall of Heroes.

The base is a city in itself, spanning a huge area, with all sorts of buildings, both military and civilian in its confines. The base is the most prestigious of all Mandalore bases, and the best of the best are sent here to learn and to watch, so that they eventually can become leaders of future Mandalore.
The grand academy can be found here, started by former Warrior Eminence DeMeer, and renowned Mandalorian Sadow.
The base serves not only a military task, but is also a stark reminder of the fact that Mandalore always needs a strong military section, and that it is in fact the military that has ensured the peace and prosperity for Mandalore, and continues to do so. The base was first constructed by a Warrior Eminence after that a great battle had taken place. To commemorate the battle the Mandalorian leader ordered the creation of a permanent watch.
After several hundred years the official plans were made to make this the military capital, and training facility of Mandalore itself. And since then it has grown ever on. Now with the rise of Mandalore out of its isolationistic position once again, the base grows ever more rapid, as the need for a strong military – but also a strong government – has never been greater in peace time then now.

The Klath’mor Monolith is the largest museum and historical archive in existance within the Mandalorian Empire. The massive Hall of Heroes contains statues and biographies of Mandalore’s greatest leaders, allowing visitors to learn about and pay tribute to those whose lives were spent bringing Mandalore glory. 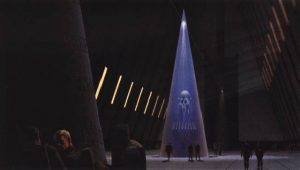 The extensive Imperium Archives contain the largest assortment of general historical documents in the Empire, while the Clan Archives contain the collected histories and relevant information pertaining to each individual clan on record. Banquets of victory and celebration are held in the Monolith’s ceremonial dining hall, as they have been for centuries. There are even meditiative gardens and private areas of reflection where inner peace can be saught and respects can be paid to one’s ancestors.

Mandalorians from the most remote of the clanlands to the farthest colony systems travel to planetary capitol city of Mandalore at least once in their lives just to visit the Klath’mor Monolith and pay tribute to all who have died in the past to bring the Mandalorian people to this day.

You can find out more about which cookies we are using or switch them off in settings.

This website uses cookies so that we can provide you with the best user experience possible. Cookie information is stored in your browser and performs functions such as recognising you when you return to our website and helping our team to understand which sections of the website you find most interesting and useful.

Strictly Necessary Cookie should be enabled at all times so that we can save your preferences for cookie settings.

If you disable this cookie, we will not be able to save your preferences. This means that every time you visit this website you will need to enable or disable cookies again.